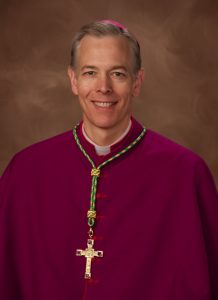 In our inaugural episode, we interview His Excellency, Archbishop Alexander K. Sample, Archbishop of Portland, Oregon.

We give a brief introduction to the show and ourselves before diving into the interview.

Archbishop Alexander Sample was appointed Bishop of Marquette on December 13, 2005, by Pope Benedict XVI, and then the Archbishop of Portland at the beginning of 2013. The Archbishop has degrees in engineering and canon law. He serves on the USCCB’s Committee on Pro-Life Activities, the Sub-Committee on the Catechism, and is on the Board of Trustees for the Catholic Near East Welfare Association and Oregon Catholic Press. His love for the sacred liturgy and sacred music were nurtured by the great Msgr. Richard Schuler of Saint Agnes Church in Saint Paul, Minnesota. The Archbishop has become known for his eloquence and pastoral ability in teaching about sacred music and the liturgy.

Since we recorded this episode, the Archbishop has released a pastoral letter on sacred music for the Archdiocese of Portland. You can read it in either English or Spanish by clicking here.

The letter he issued in the Diocese of Marquette, Michigan, as referenced in this show, is available here.

Learn more about the Archbishop and his ministry by clicking here.

Special thanks to Monica Fitzgibbons for her work in securing rights for us to use the music you hear at the beginning of each episode: Byrd’s Haec Dies from the album Sacred Treasures of England, sung by the London Oratory Schola Cantorum Boys Choir, directed by Charles Cole.

Special thanks also to Kevin Collins, who is the voice of our intro and outro.